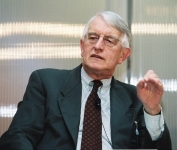 Until about 40 years ago the Netherlands university system copied the German example. But it has changed into the Anglo-Saxon direction through a series of reforms. For a small country the Dutch universities managed to maintain a relatively prominent international position, due to the success of the reforms. The case of the Netherlands provides additional arguments for the necessity and the possibility of reforms in the German university tradition.

Reform was the dominant theme in my relationship with CHE and its director Professor Müller-Böling. Retiring from the presidency of the Vrije Universiteit Amsterdam in 1996, I had about 30 years of experience with university reforms in the Netherlands, and the freedom of the third life gave me the opportunity to do some work outside the Netherlands, mainly in Russia, South-Africa and Germany.

Coming to Germany I was surprised to find back the type of university which I had known in my days as a student and a junior staff member in Amsterdam. In that context I have learned to highly appreciate the work of CHE and of Detlef Müller-Böling as its leader. With patience and perseverance they promote and support reform, and professionalization. Old universities in Europa are usually much more professional in research than in education and organization. Nowadays the success of CHE is clear, but in the beginning it seemed to be a mission impossible. All honour to its leader and his colleagues!
The point I want to make in this essay, is that it is not yet clear where the German university reform will go. Reform has started and the need for it is generally accepted, as the impact of the Bologna process shows. But the answer to “Quo vadis, Germania“ seems still to be open.

For modern universities to be successful in efficient organization of education, in selective participation in good scientific research, in adjusting to mass higher education and tight public funding, in playing their role in the context of their knowledge society and economy, they have to function as organizations, comparable to enterprises and companies, though of a different nature.

Integrated management of resources and of work is a characteristic of organizations which are able to handle change in their contexts and innovation in their performance. This integration is absent in the traditional German university, which therefore hardly qualifies as an organization. Anglo-Saxon universities, certainly in the United States, are much stronger in that respect. Gradually achieving that integration was fundamental in the Dutch university reform.

After the 18th century nationalization of universities in Europe, the German model combined state funding and administration with autonomy of the professors by keeping management of resources and management of work apart, allocating the latter to the federation of professors in each faculty. And individual autonomy of the professors in turn was balanced by freedom of the students, a combination of freedoms which was not particularly conducive to efficiency in education. Splitting up university management between the ministry of education and the federation of professors, with student self-regulation as a corollary, could be maintained as long as the growth of scientific knowledge was slow, universities were elite institutions, and competition within the state budget was limited.

Way one is to deregulate management by the ministry, introduce lump sum funding of the university, give it legal personality and ownership of its buildings and grounds, make it the employer of also the professors, have it practice its own quality control and accountability, and especially strengthen the position of the faculty deans as the operational integrated managers within the university. Way one is the way into the Anglo-Saxon direction, followed by e.g. the Netherlands.

Way two is to extend management by the ministry to regulating the outlines of research and education, using sophisticated management techniques and instruments, setting up advisory bodies, identifying suitable performance indicators, introducing modern management information, avoiding ineffective bureaucracy, etc. In present day politics, which understands the contribution of university knowledge to economic growth and social development, way two may seem attractive, especially in a state environment with good tax income and a “Prussian” governance tradition.
Considering the differences between the Länder in Germany, in terms of financial strength and administrative tradition, one could imagine a competition between way one and way two. Why not? I do not think that across the German Republic as yet a national choice between the two ways has been made. The present German situation has ambiguity, which I will try to illustrate with regard to the Zielvereinbarungen and to accreditation.

My personal bias is of course towards way one, and this seems to me to be also the preference of CHE. Strong backing for that position is provided by neo-institutional economic theory, understanding principals and agents, which abound within and around universities, and taking transaction costs into account. This entails that I have strong doubts with regard to the possibility of reliably knowing what is going on in a university, and consequently the possibility of effective hierarchical control. It also entails that I prefer monitoring for negative feedback on a limited number of variables, since general distrust is very costly and generates bad organization culture.
The concept of Zielvereinbarungen has gone very far. It has been accepted nationwide as a model of good governance practice. It is said to be aimed at decentralization and deregulation, reduction of state bureaucracy, coordination of planning by partners, promoting innovation and strategic management, successful dialogue, etc. At first sight it implies moving into the direction of Way One. But within the partnership the state is much more powerful than the university, at least as far as finance and property are concerned. The university has no legal protection against the state using Zielvereinbarungen to move to Way Two, e.g. contracting that the university will perform better in a certain discipline according to certain laid down parameters. The one who decentralizes, can go back and centralize again. The state does not only play the game of dialogue and contract, but it can also change the rules.

From a legal point of view it is not clear what Zielvereinbarungen are. Which sanctions are possible? Is there freedom of contract, and can partners agree to disagree, e.g. waiting for better management on one of both sides? When the relationship between the partners is very close, but the balance of power is poor, due to lack of legal security, a successful dialogue is at risk and the formalization of conclusions is not reliable. Too much principal-agent problem will be involved.

The component ‚Vereinbarungen‘ seems to contain a metaphor, just like ‚Ziele‘. University core business, its management and innovation cannot easily be stated in terms of ‚Ziele‘. How to measure? In the rhetoric of state and politics ‚Ziele‘ are a much more common parlance, but as political-administrative, non-legal elements. The time scale for serious processes of change and innovation in university core business is longer than a few budget years or the period until the next election. Change in culture takes more time and is usually more important than change in structures. I am in doubt as to whether metaphors can provide instruments for good governance.

A plausible interpretation of the German phenomenon of Zielvereinbarungen as contract management could be that they are a – possibly rather clumsy – way to patch up the separation between the two managements of the university, and in that way to maintain the status quo and to postpone reform. Zielvereinbarungen seem to be especially useful for damage control in case of heavy budget cuts.

The introduction of accreditation is far more promising. Accreditation is a proven and well-defined procedure to provide an external expert assessment of professional work, leading to public and formal conclusions. The procedure can however be used for very different purposes. It can be used to back up state control of the higher education system. In Russia the federal ministry of education labels and recognizes individual public and private institutions of higher education as universities, institutes or academies on the basis of accreditation.

As a consequence of the Bologna declaration accreditation has been developed and introduced in Germany to assess new curricula and degrees, as an alternative to regulation by Prüfungsordnungen of the state. A positive assessment is the basis for the concerned university to teach the program and for the concerned ministry to authorize and fund the program. This use of accreditation has supported good practice, including good organization, of education at faculty level, which is a very useful contribution to strengthening the basic university organization. The middle ground between state regulation of examinations and autonomy of professors has been targeted, which is a move into the Anglo-Saxon direction, but also a matter of professionalization on the education side of the university. This accreditation however may well be a transition phenomenon, unless the transaction costs can be brought down considerably.

The form of accreditation which in my opinion is most important for the future, is the accreditation of information provided about the performance of a university in education and research. The test by independent experts is about the reliability of that information, for its use by citizens and agencies (not excluding the ministry) which are interested in that information. First of all this will be relevant for prospective first year students and their parents. But rating of research performance in disciplines in which non-ministry funding plays a role, is also relevant.

It is in developing this field of information that CHE has played a great and commendable role in recent years. In the end this type of accreditation might make much of the traditional university management by the state redundant. Universities have been nationalized in view of the control of their quality, especially in education. No better partners for a university in a knowledge based society however than well-informed citizens.
Harry Brinkman